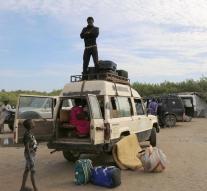 banjul - A final attempt to avert a crisis in The Gambia president seems failed. Mauritanian President Mohamed Ould Abdel Aziz who negotiated with President Yahya Jammeh of Gambia Wednesday about his resignation, has flown to neighboring Senegal, reports a source within the Senegalese government.

West African battle troops gathering in the country to intervene. Aziz is now in consultation with the Senegalese President, Macky Sall, on measures to be taken.

Senegal had previously intervene know if Jammeh not before midnight (local time) resigned. That deadline has now passed, but still remain Senegalese troops stationed at the border.

Jammeh lost the presidential elections in December, but after 22 years of being in power trouble clearing the field. Thursday Adama Barrow would be inaugurated.