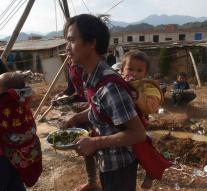 rangoon - The military in Myanmar has several thousand Rohingya from their homes in the northwest of the country, after attacks in the area by members of the security forces. Which sources have told within the Muslim Rohingya community.

The soldiers withdrew Sunday the village Kyee Kan Pyin inside and carried the roughly two thousand inhabitants to leave, told the sources. The government says the army in a conflict is involved with about four hundred insurgents, who comes in part from the Rohingya community. According to people in the area, the authorities also citizens of the grain and burned houses.

Some people are caught in surrounding villages, but some had to spend the night outdoors. ' I am now living in a rice field outside my village with two hundred others, including my family. I'm homeless, '' said one of the men. ' After the soldiers arrived they said if we did not leave, they would shoot us. ''