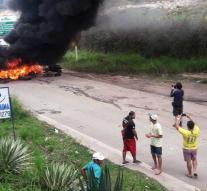 brasilia - The Brazilian government is sending military personnel to the border town of Pacaraima, because there were confrontations between Brazilian residents and migrants from Venezuela on Saturday. The army reported that about 1200 Venezuelans fled to their own country after the riots, according to the Agencia Brasil news agency.

The riots broke out after several Venezuelans robbed and abused a Brazilian shopkeeper. Some of the residents of Pacaraima then went into the camps where the Venezuelan migrants lived. The Brazilians set up demolitions and they also set fire. According to the authorities, there were no casualties due to the revenge action.

Pacairama, in the northern province of Roraima, lies on the border with Venezuela and on an important route that Venezuelans choose to escape the deep crisis in their own country. In the first half of this year, sixteen thousand Venezuelans have already applied for a residence permit in Roraima.