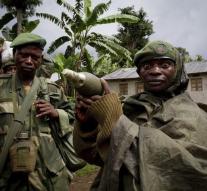 kinshasa - In the region of Kasaï in the Democratic Republic of Congo, more than 3300 civilians have been killed by Congolese security forces and a military militia since October. The figure comes from the Catholic Church, which is based on its own sources in the remote area on the border with Angola.

According to the church, the militia Kamuina Nsapu destroyed four villages, killed hundreds of people and destroyed the church's property in a campaign to chase government forces. In turn, the army has destroyed ten villages to eradicate the insurgents.

The fighting between the army and the soldiers broke out after the army had killed a tribal chief demanding the departure of the government forces. Kasaï is a opposition to President Joseph Kabila, who refuses to resign while his term expired in December. According to the United Nations, more than 1.3 million people were fleeing in the area.