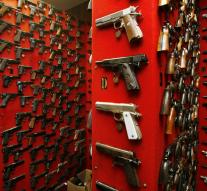 - US arms exports has grown tremendously in 2014. According to a new research report from the Congressional sales grew by about 35 percent to 33 billion euros converted. The year before, led the US for less than a euro 25 billion on arms.

The amounts are published by The New York Times. According to the newspaper, the growth in exports mainly due to contracts signed with Qatar, Saudi Arabia and South Korea. America remained the largest arms exporter in the world, followed by Russia.