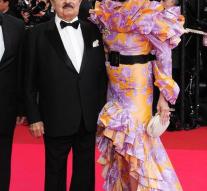 london - The Saudi arms trader Adnan Kashoggi died in London at the age of 81. That said his family told the British press office PA on Tuesday. Kashoggi, who suffered from Parkinson's disease, was one of the most controversial members of the international jet set in the eighties.

He earned an estimated capacity of 2 to 4 billion dollars in his peak days during the Cold War with lucrative deals. Kashoggi often mediated transactions between US arms manufacturers and Saudi Arabia. Especially at Lockheed he was a welcome guest.

The businessman, who, among other things, studied at the elite university Stanford, was particularly impressed by his extravagant performances and paced lifestyle. They stood firmly for big heads in the boulevard blades. His parties lasted for days. For a party in honor of Elisabeth Taylor, who had survived the cancer, he hired the mega Queen.

In a later life, Kashoggi got financial problems. His super yacht Nabila was bought by Donald Trump, the current US president, according to the media.