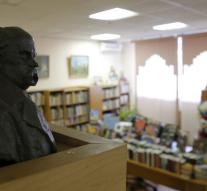 moscow - Russian police on Thursday with great fanfare invaded a library in Moscow. He had namely books on the shelf which authorities have described as anti-Russian propaganda. Agents wearing balaclavas and machine guns came as workers early morning into the building to arrest the principal.

The library specializes in Ukrainian literature and has 30 000 books written mainly in Ukrainian. The police had already visited Wednesday to search the entire building and two hundred books and pamphlets to carry.

The director is fixed and it is investigated whether she is guilty of inciting racial hatred and denigration of human dignity. If she is found guilty, hangs her four years in jail over his head.