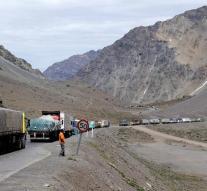 - Argentina and Chile have finally launched a serious plan for the construction of a 14 kilometer long tunnel through the Andes. Which should significantly shorten the travel time between the two countries by road. The project, which has already produced a study in 2011, can be realized in ten years. That said, the Argentine Minister of Transport on Tuesday.

The governments of the two South American nations have now agreed to work to make drilling a connection route at an altitude of 3800 to 4070 meters. The current border is at 4780 meters and reached via a dangerous road. The 'Agua Negra' tunnel will cost 1.3 billion euros and is one of the largest infrastructure projects in the continent. The contract starts ASAP.