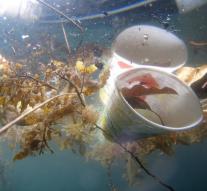 bremerhaven - The pollution of the Arctic deep sea is taking on worrying proportions. The amount of glass, plastic and fishing nets 2,500 meters below the surface is encountered, the last decade has increased significantly. That shows long-term study of German scientists Mine Banu Tekmann and Melanie Bergmann of the Alfred Wegener Institute in Bremerhaven.

Since 2002, they follow two measuring sites in the Fram Strait between Greenland and Spitsbergen developments in the seabed with a remote controlled camera. Using thousands of photographs could be established that in the period to 2014, the number of debris per square kilometer in the area amounted to an average of 3485, with the sad nadir 6333 2014.

Downright dramatic was the situation at the northernmost station. ' Here is the pollution in a decade more than twentyfold. In 2004, we spotted only 346 pieces of debris. Ten years later there were 8082, '' said biologist Tekmann. ' And we're still only particles of at least two centimeters. ''

The glass on the seabed can be explained most easily. Because that stuff hardly spread but drops directly into the seabed, the increase is a logical consequence of the increasingly crowded shipping in the area.

Where all the plastic litter will be more difficult to adopt from, though it is indisputable that the Gulf Stream carries degradable material over large distances from south to north in the Atlantic Ocean before it gets deep. Possibly melting polar ice plays a role.