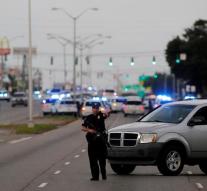 - The gunman Sunday in the US city of Baton Rouge three policemen shot dead has served in the US Army. At the shooting, near the headquarters of the police, were also wounded several officers.

The victims were ambushed and came under fire after a report of a shooting. The suspected gunman was shot dead in a gunfight. Police searched for a while for possible accomplices, but concluded that he had probably acted alone.

US media identified the gunman as Gavin Long from Kansas City; according to CBS Sunday he celebrated his 29th birthday. About his motive was still unknown.