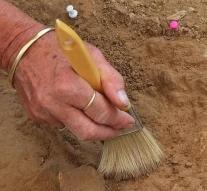 amsterdam - With contemporary activities presents archeology in the Netherlands this weekend as an entertaining pastime. The National Archaeology Days aim clearly to shake off the dusty image.

At over two hundred places are Friday, Saturday and Sunday activities organized by, among other museums and heritage institutions. As a special Pokémon GO route of the National Museum of Antiquities in Leiden passes the archaeological monuments in the city. Geocachers can Spaarnwoude follow an archaeological route, while an escape room is decorated in the Archaeology House in Alphen aan den Rijn, where people are locked up and by solving a puzzle may come out again.

A 16-meter replica of a Roman galley cruise the Rhine from Katwijk to Alphen aan den Rijn, manned by Roman re-enactors. The 63 horses that died may have been found in 2010 Borgharen, in a battle in the eighteenth century, are shown for the first time at the Centre Céramique in Maastricht.

The legal obligation to do soil before starting construction projects are now done much more excavations. ' The premise is that the finds are preserved in the soil after they have been documented. If you dig destroy the view of history, 'says archaeologist Joerie Sister, which is in the organization of the theme weekends. If there is not ' is driven or drilled into the ground, it remains in the ground. But if there is a possibility that there is a pile by an archaeological object, we get it off the ground to protect it. ''