Home / World / Archaeologists on threshold of the Holy Sepulcher 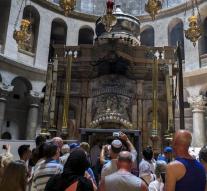 jerusalem - The place where heaven and earth meet, so the Holy Sepulchre is called. A team of archaeologists and restorers is these days getting ready to go into the last earthly resting place of Jesus after his crucifixion. The place is in bad shape after millions of pilgrims have visited in Jerusalem.

The cave which Christian leaders and adopt a number of scientists that Jesus of Nazareth was being laid after his death around the year 30 and three days later rose from the dead, was two centuries ago last restored. All this time no one has put a foot in the cave.

About the cave was later built the Holy Sepulcher, which will also be restored. The church dates from the first half of the twelfth century. A team of Greek scientists mainly carries out the restoration, a task which has been allocated nine months. The tomb was already examined by radar and laser scanners. This is inter alia discovered that the stone that covers up the cave contains a large crack.


Church, stone grotto and the reinforcement of titanium. Patriarch Theofilos III of the Orthodox Church of Jerusalem spoke to The Washington Post about,, an indescribable energy 'he felt at the holy place.