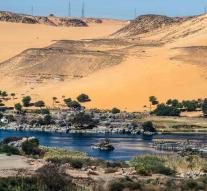 cairo - A team of French and Egyptian archaeologists has excavated the oldest village so far found in the Egyptian Nile Delta. The excavations were done at Tell El-Samara and come from the Neolithic period. The archaeologists have found objects made between 4200 and 2900 BC.

Never before have settlements from this era been found in the Nile delta. That is why it is an important find, according to the Egyptian Ministry of Antiquities. Now archaeologists know for sure that people have settled in the area since this period.

Archaeologists have also found storage sites with bones from animals and remains of plants. According to the ministry, that can be used to investigate how these people lived.