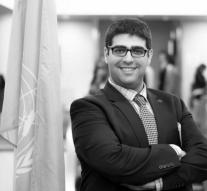 - An American student says he picked off a plane in Los Angeles after passengers had heard him speak Arabic.

According to Southwest Airlines Khairuldeen Makhzoomi was ejected for questioning and the flight departed while there was still talking to him.

The 26-year-old student said he called his uncle to tell you about a speech by Secretary General of the United Nations Ban Ki-moon which he had attended. He told his uncle about a question on Islamic State he had made and ended with the phrase 'Inshallah' (God desiring). Then he was taken from his chair and escorted out.

Makhzoomi said Monday at the New York Times that,, this is what Islamophobia doing to this country. ',, Human dignity is the most important in the world. ''

The FBI after research indicated that there was no further action is required and Makhzoomi could continue flying with another airline. He walked eight hours delayed by the incident.