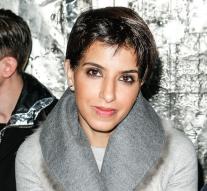 - Of the fashion magazine Vogue an Arabic edition will appear soon. At the beginning of autumn is the first website in Arabic. The paper edition of the magazine in Arabic is planned for the spring of 2017.

The new version will have the unmistakable name Vogue Arabia, as the magazine publisher Condé Nast International announced Tuesday it. To allow an Arab issue, the company has partnered with the media company Nervora from Dubai, which is already a fashion website has to his name.

As editor of the Arabic edition is Deena Aljuhani said Abdul Aziz. The 41-year-old woman married a man from the royal family in Saudi Arabia.


Vogue has the new edition there soon 22 different editions. The originally American magazine is published in countries like China, South Korea, India, Mexico, Brazil and Ukraine.