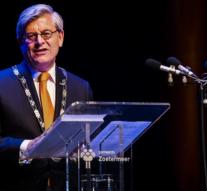 zoetermeer - Zoetermeer Mayor Charlie Aptroot of Zoetermeer has incorrectly informed the council about radicalization in his city. Although in 2013 left the first jihad fighters from the town to Syria, Aptroot wrote against my better judgment that there had been no signs of radicalization. Reported that the NRC Tuesday.

According to research by the newspaper that those signals were in fact there. Zoetermeer mosque Al-Qibla hit repeatedly alarm about radicalising young people, but there was no answer at the municipality. In July 2012 did the mosque administration reported to the police after one of the members of mistreated by a radicalized younger.

Former MP Aptroot but acted as if nothing was going on in his city. Even after known Dutch youth was as jihad fighter were uitgereisd, he asserted firmly that no signals were received regarding the radicalization.


Aptroot decided not to intervene in accordance with NRC because according to him, was no disturbance of public order. The policus states that 'radicalization' has a different meaning in the year 2016 than in 2012, when there were no young people had traveled to Syria.