Home / Tech / Apps for A58 files have scarcely users 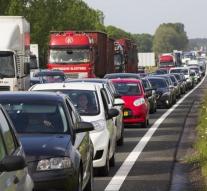 - Apps designed to prevent phantom traffic jams on the A58. A nice idea, but it does not seem to work. The project Ghost File A58 cost 17 ​​million euros and did not provide for less congestion.

On the A58 motorway traffic jams occur regularly for no apparent reason. That phantom traffic jams cost a lot of time and provide a lot of irritation among road users. The project should reduce congestion, is now several months underway. The apps that come with the project, giving include speed advice.

According transport network there are not enough users to observe results. The apps have been downloaded 4000 times. But in the month of June, for example, there were only thirteen users. To be effective, must be at least 2 per cent of road users use the app while driving.

Traffic network reports that the app should be user friendly. Thus, there is a delay of several seconds for the loading of data. Therefore people are advised at the wrong time.