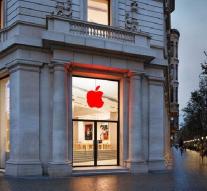 Artificial intelligence, artificial intelligence, or AI abbreviated in English, it is important for Apple. As the assistant Siri uses code that allows not only to recognize speech but also to understand the intent of a question or request. That independence and knowledge of people and their intentions is seen as the basis for the further development of zelfdenkende- and acting computer.

The reason why Apple is suddenly so open about the research and the use of AI is many a mystery. Analysts and Apple watchers say the company is likely looking for talent and hopes that by reporting the publication of the essay interested qualified researchers at the company to continue working on AI. The company itself declined to comment on the basis of the essay.

In recent years, Apple has experienced increasing competition, including in the field of AI. So now also have Google, Amazon and Microsoft teams working on self-thinking, intelligent software and equipment.