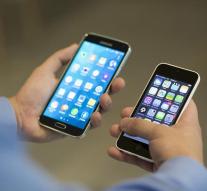 - A new chapter in the long-running patent battle between tech companies Apple and Samsung. Apple in a court in the United States a claim of 180 million dollars deposited after a patent infringement by the South Korean company.

Apple's request follows a fine of $ 548 million which Samsung recently paid. The new requirement involves a calculation by product where there would be infringing on the patents of Apple. In five devices Samsung would 'prohibited techniques used. Apple previously claiming damages plus interest.

In a judgment in 2013 Samsung had yet to hear it had to transfer $ 930 million together in this case. That amount was earlier this year thus reduced significantly. The parties have each other over the years been accused several times of violating another's patent rights.