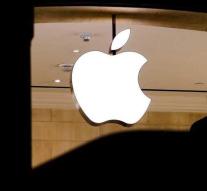 cupertino - Apple will unveil the new iPhones on September 12th. That presentation is streamed live on Twitter for the first time. This was reported by the BGR techsite on Thursday. Apple itself has not yet announced a presentation.

In recent years, Apple broadcasted its presentations on its website and via the Apple Events app on Apple TV. But Apple did not use a different medium before. Through Twitter, Apple would be able to reach more people.

Apple will probably unveil three new iPhones, including an upgrade of the iPhone X. They are expected to be ordered from September 14th. There may also be a cheaper iPhone, as an entry model. In addition, there is talk about a new iPad Pro, a new Apple Watch and new AirPods. Maybe Apple also comes with a wireless charging mat, the AirPower.