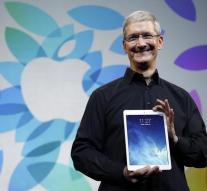 - Apple has improved its profit in its third quarter to $ 1.42 per share, compared with a forecast of $ 1.38. His lap after market share up 5%, also its positive outlook for the remainder of the year.

The technology company from Cupertino posted quarterly revenue of $ 42.4 billion, of which $ 42.09 billion was estimated by market researchers.

Most analysts preceded of a strong decline in earnings, but estimate that eventually would get little effect on the stock price.


Apple still appears to be primarily a iPhone business. The vast majority of Apple's revenues come from the smartphone series. Nbsp;

The price / earnings development is always in the same line with the announcement of a new iPhone version and that effect has been strengthened in recent quarters.

In September, reportedly the new iPhone 7 on the market. Which zouin functionalities not much different from the iPhone 6.

Meanwhile, Apple would suffer gerkegen of consumers delaying purchases of new equipment and no longer purchase any subsequent updates.

The last two quarters, Apple already saw a decline in sales, measured on an annual basis.

Many analysts remain optimistic for the longer term. Goldman Sachs has $ 124 per share stand as price target.