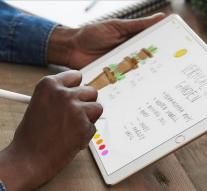 cupertino - Apple released six videos on Friday that shows what users can do on an iPad with the new iOS 11 operating system. It's possible to scan official documents and sign them with the Apple pen.

In the new system, it is also possible to use multiple applications at once. This can be useful for who, for example, wants to collaborate with a colleague on a project. The pen makes it possible to make notes in documents or pictures.

IOS 11 is currently in beta phase. The system is likely to be released in September.