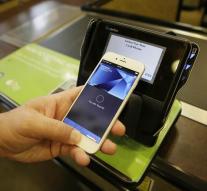 - Apple plans to roll apple pay next year in some European and Asian countries. Bloomberg reports that Apple's mobile payment service to China, Hong Kong, Singapore and Spain will bring.

The US company Apple launched Pay over a year ago in the United States domestic market. The service, which allows iPhone owners in apps and contactless pay in stores, is now also used in the UK, Canada and Australia. In the US, Apple Pay still not proved an unqualified success. This is partly because there is little advertising for the service is made and because many US payment terminals are not yet suitable for apple pay, writes Bloomberg.

Apple would want to use next year apple pay in markets where consumers are more accustomed to contactless payments and the technological infrastructure is already there. It will be in those countries or to compete with the mobile payment from local banks and other companies, such as South Korea's Samsung and China's Tencent.