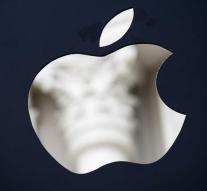 - Tech giant Apple needs $ 234 million ( 206 million euros) payable to the University of Wisconsin for infringement of patents. Which has determined a court in the US . The dispute concerns the design of a chip.

The institution said that Apple in its iPhone and iPad used the chips while the company knew of the patent. The university had let the chips already in 1998 patent.

The fine for Apple was less than the $ 400 million which had demanded the university. According to the judge, Apple did not knowingly infringe the intellectual property of the university, which resulted in lower compensation.

However, Apple will appeal against the sentence , as the tech giant made ​​clear. Earlier this year, Apple managed in a similar case in order to challenge a fine of $ 533 million successfully. The university is at least happy with the verdict. " The hard work of our researchers and the integrity of our patents and licenses is rewarded in this ", said the institution in a statement.