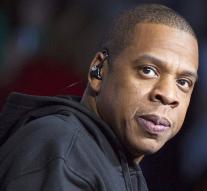 According to the newspaper, it is not certain that the discussions will lead to a deal. Jay Z bought the parent company of Tidal in March last year for about $ 56 million. A few months ago, it came to a dispute between the rapper and the Norwegian seller, who would have misrepresented the number of subscribers.

Tidal said in March that it has more than 3 million paying subscribers. This is significantly less than the 15 million Apple itself with its streaming music service Apple Music. In addition, Spotify competitor 30 million paying customers.