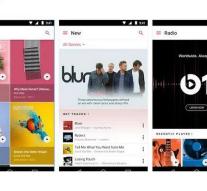 - The app from Apple's music service Music since Tuesday also available for download for Android. The application had previously been available to people with an iOS device.

The app for Android is a beta, or a version that is not fully developed. Thus missing the music videos that are present in the iOS app.