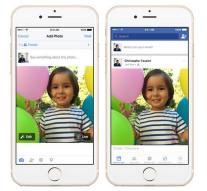 - Facebook offers its iOS app support for Live Photos taken with the iPhone 6S and 6S Plus. Thus it follows that the Tumblr photo format already supported since a few weeks.


Facebook limits the support to the iOS app allowing Android, desktop and mobile Internet users can not see the moving pictures. Moreover, it only works with iOS 9 and higher so only the owners of an iPhone 4S and newer equipment see the animated images.
Uploading a photo Live works in much the same way as a regular photo. Only needs a Live Photos Live icon in the lower right corner will be checked to run the feature. Other Apple users can convert the picture into motion by clicking on the photo.
Facebook has started with a small deployment of the new feature. The majority of the users, however, will still have to have a number of weeks patience.
NEW