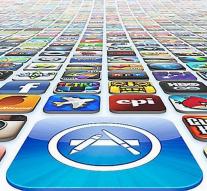 - Apple is cutting into its App Store. From September 7 the company will seek out apps that are no longer maintained. Makers have thirty days to update their app yet. An app that crashes upon opening will be removed immediately. If Apple has deleted an app, people who had installed him there to continue using.

Apple also introduces new rules for the names of apps. Which may contain only fifty characters. Apple now allows 255 characters. Some authors had their app provides an extremely long name, with words that had nothing to do with the app itself. So the app was popping up in more searches, so there would be more users.