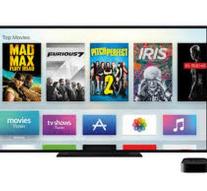 - It seems that the Apple finally throws in the towel when it comes to his struggle with traditional TV channels. The company, according to financial news agency Bloomberg discontinued the development of a new service, with live TV would be offered.

Apple will already have to disclose during its press event last September the service. However, given the necessary arrangements with TV stations around not about how high the fee should be for the transmission of the channels.The initial idea was to offer some 14 channels for around $ 30, giving subscribers no longer needed a cable contract to watch these channels. Although that amount for Dutch standards seems rather high for just 14 channels, prices for cable subscriptions in the United States are much higher and Apple's package would especially for people who do not necessarily want to have all channels are attractive.However, the asking price of the channels was too high, as Bloomberg reported citing people with knowledge of the matter. Apple would now be focusing on offering apps through its new Apple TV set-top box. This allows stations themselves decide in what way they offer their programs, whether it is live or not and whether it should be paid and how much that will be precise.
NEW