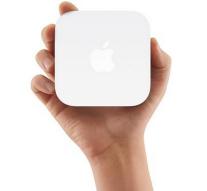 - It would appear that Apple will stop the development of its AirPort routers. According to AppleInsider, the team working to shut down AirPort and his staff put on more lucrative projects.

In addition to the AirPort Extreme and AirPort Express is the shutting down of the AirPort team probably bad news for Apple's backup and network Time Capsule. The people who worked previously been transferred to these devices to other departments. So the Apple TV team has been given a boost.

Especially the timing at which Apple get off the router market is remarkable. Competitor Google just recently announced its own router. Apple released the first own router, AirPort Extreme, in 2003.