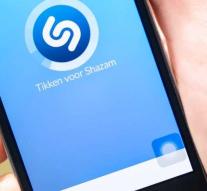 brussels - Tech giant Apple can take over Shazam, an app that can recognize songs. The European Commission has announced this after an in-depth investigation into the proposed takeover.

The regulator feared that the merger would limit the options for users of music streaming services. 'After a thorough analysis of Shazam's user and music data, we judge that the acquisition does not lead to less competition in the music streaming market,' said EU Commissioner Margrethe Vestager (Competition).

Apple announced the acquisition in December. Vestager started her research in April.

With the data of Shazam on which songs are popular, the iPhone maker can improve his music streaming service Apple Music. In this way, Apple must be able to better deal with Spotify, Deezer and the music services of Google and Amazon.