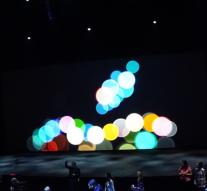 cupertino - Apple has begun the production of a smart speaker, operated with Siri. It may be presented at WWDC next week. Probably the speaker will be delivered only later this year, according to Bloomberg press office.

With the speaker, Apple is competing with the Amazon and Home Echo of Google. It has to bind people to Apple and other devices and services of the company, and prevent them from switching to competitors like Spotify and Amazon Prime Music.

According to Bloomberg, the speaker is manufactured by Inventec from Taiwan. That company also makes all the AirPods.

On the WWDC, Apple may also present a new iPad and an updated MacBook.