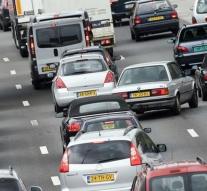 Thus the minister hopes the number of victims covered by distraction to reduce the traffic. 'A tougher approach is urgently needed. Last year there are more deaths in traffic. There were 621 and thus 51 more than in 2014. This has mainly to do with the use of smartphones, 'says VVN director Cohen.

As early as June VVN sent an urgent letter to The Hague, which was asked to consider legislation at every selling smartphone to add an app or install a device that ensures at speeds above example, 20 or 30 km p / h for automatic shutdown. The minister now wants to seriously look at such opportunities.

'It's good that the Minister respond to the sharp increase in the number of road casualties. The plans are good, now it is a matter to be fast with legislation. Each month earlier saves lives, 'said Cohen.

'People watch an average of 220 times a day on their smartphone. Also while driving. '