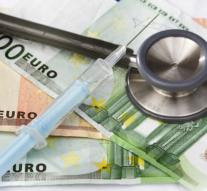 - The Council of State, the highest administrative court in the Netherlands, leans Tuesday on years long conflict between Open State Foundation (OSF) and the National Healthcare Authority (NZA). Through an appeal procedure attempts OSF, an organization which promotes digital transparency, information on medical treatments and prices in care gain public.

The NZA refuses and wants to keep secret the hospital rates. Open State Foundation says that consumers 'a free and informed choice' must be able to distinguish between care providers or insurers. According to the foundation, many people have no idea what it costs medical treatment in a hospital, while the majority of care is paid for by the taxpayer. NZa manages a database showing which hospitals have treatments done and what would be the cost.

Meanwhile, put the insurers CZ and VGZ of hospital care online prices. This happened after a call from the Consumers' Association. Or Achmea and Menzis, the other two major health insurers in the Netherlands, follow this step is still unknown.

Minister Schippers (Health) wants some time that all health insurance companies to disclose the rates that they agree with hospitals. That's according to it in the interests of the patient. The minister wants the Dutch Healthcare Authority comes up with a plan, in which all hospital rates to be comparable.

The Consumers launched in September, along with OSF, a website where patients are encouraged to anonymously deposit their hospital bill. On that basis, hoping to get the stakeholder view of the price differences for the various treatments.

The lawsuit is Tuesday at 10. 00 pm at the Council of State in The Hague.