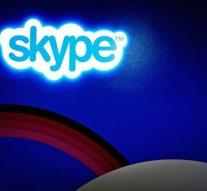 luxembourg - The Skype app goes to the shovel. The video service gets new features, thus resembling apps like Whatsapp, Snapchat, and Facebook Messenger.

In the new version, it is possible to share photos and videos that disappear after a day. Skype then saves the same way as Snapchat and Instagram with their Stories function. The chat conversations look different with more colors, GIFs, stickers and emoticons, and video calls also get new features. For example, it is now possible to react directly with emoticons in a conversation.

At a later time, the desktop version of Skype will also be modified. The new version of the app will be rolled out in Android over the coming time. Then iOS follows.