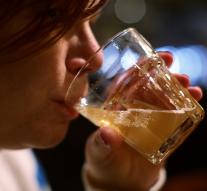 enschede - An app that people child's releases of their drinking problem. Scientists from the Universities of Twente and Amsterdam, Tactus Addiction and Saxion University of Applied Sciences have developed a. It seems just a matter of swiping.

People who feel they too often look too deeply into the glass can make themselves a great disservice by occasionally play a game, says researcher Marloes Postel. 'Because as soon as possible pictures of alcoholic drinks to swipe away and photographs of slides to slide towards you fresh right brain is trained to break unconscious patterns. Think of it as a kind of mental gymnastics. Who this game for three weeks, doing might notice all results twice a week. '

The researchers hope the new app, which Breindebaas hot, especially to reach people who drink excessively but do not help still being sought. 'One in ten Dutch people with an alcohol problem lies in addiction. The rest do not. They know they drink too much, but for them it is often too big a step to seek help. The app we next curbing addiction expect the threshold to some regular assistance to lower. '

The method was developed by the University of Amsterdam and is already used in the clinical addiction. 'The effect of the addiction is that after one year the percentage of participants that yet again, grabs the bottle dropped from fifty to forty percent. Ten percent decline seems small, but addiction is an impressive result. 'That there is now a version for smartphone and tablet is a novelty, Postel said. The coming months will test people try Breindebaas. Watch early next year, the researchers how and when the app is available to everyone.

People who are interested to take part can register to research at www. breindebaasapp. viz.