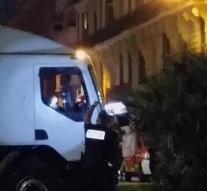 - The station France 2 has apologized. After the attack in Nice left the station images of the truck hurtles through the crowd.

A reporter additionally interviewed a man who was sitting on the promenade beside the remains of his wife. 'A misjudgment due to difficult conditions '', the parent company of France 2 said Friday.

The images were France 2 to stand a lot of criticism. 'Good evening, sir, you have lost your wife, a reaction? '' Wrote journalist Nicolas Hénin on Twitter. Henin was kidnapped in Syria between June 2013 and April 2014.