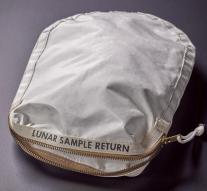 new york - A bag of the Apollo 11 in which material from the moon was taken to earth in 1969 will be auctioned in July and may amount to a little 4 million euros. It is the bag with which American astronaut Neil Armstrong, the first human on earth, took pieces of rock and dust to earth.

According to the American Space Agency NASA, for the first time, stuff from the groundbreaking moon mission is legally publicly sold. In the US there are legal restrictions on the sale of items of moon missions. There are still traces of dust in the bag.

The bag has, in the past, 'accidentally' come to an auction. The NASA has subsequently taken in vain to reconsider him. The current owner, a lawyer from Chicago, did not pay a thousand euros at the time. The auction is on July 20th in New York.