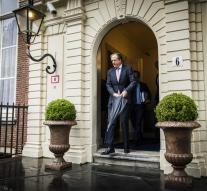 the hague - Within D66, concern has arisen about the future of multiple parenthood. In a letter to be published in the possession of this newspaper, party members of the party will call the bell. They want Alexander Pechtold to launch another course in his negotiations with VVD, CDA and CU.

This week showed that the negotiating table is about the future of multi-parent families. It is about family forms in which more than two parents care for one child, such as a homosexual woman and a woman or two women and one man.

Now, only the authority of two parents is legally recognized, so that in older-age families, painful choices must be made about who is out of the boat. The four parties are sorting out for setting up a committee to chart it; A proven Hague's recipe to park a politically sensitive issue. That would be necessary because the subject was controversial with the Christian Union. However, a final decision has not yet been taken, sounds from the four parties.

According to the letter from the D66s, a previous commission has already been investigated and is now time for action.

'Get rid of the idea of ​​a committee that will review the work of the previous committee,' said the authors. 'To D66 (and the VVD) we say: we understand that compromises must be concluded in order to rule together. But this should not be a change in the formation. Many have voted for you to increase our freedoms, not to be constrained by a small minority. '

The initiators believe that the subject should be a 'free issue', where each MP himself conscientiously on should be allowed to decide, without the constraints of a coalition agreement. Also, Members of Parliament should even be able to submit legislative proposals.

The rebel D66s warned that they did not have to leave it when the format table finally decided to park the issue with a committee. 'We will fight for this', threatening the D66 members from Amsterdam, Arnhem and Groningen.

Party leader Pechtold is reportedly outraged by the letter. He confirms his existence but wants to make little words dirty to the epistle. On the question of whether he found the interference not annoying: 'Neuh. There are a lot of people who have an opinion about everything. Yes... 'His response to the D66's is:' I'm closing an agreement, I'm looking forward to the election program. '

It is the first time it has been organized from one of the four negotiating parties about a possible deal between VVD, CDA, D66 and CU.