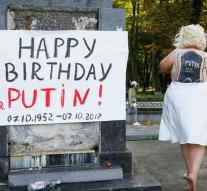 moscow - The demonstrations against Russian President Vladimir Putin and for fair elections Saturday in Moscow and about eighty other Russian cities have occurred without major incidents.

There are no arrests in Moscow. According to the police, about seven hundred people participated in the demonstration. The organizers spoke of the double number. From other parts of the country there are messages of a total of 120 arrests.

The protests, which were banned by the authorities, were organized by supporters of opposition leader Aleksej Navalni on the day that Putin celebrates his 65th birthday.