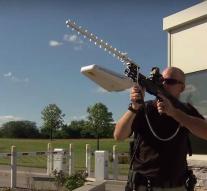 - Now flying drones are becoming cheaper and more accessible, there is also increasing demand for resources. The American company Battelle has made ​​an anti-drone gun that uses radio waves in order to block the operation of the devices.

Most consumer available drones are controlled via the same kind of waves wifi as wifi. It also uses GPS signals to navigate. Drone Defender sends the same signals, allowing the drone gets " confused " and not the driver's commands can receive more. Depending on how the drone is programmed, it will then either on its own land or go back to the initial destination.

Battelle puts the device in the market as being to protect such as government buildings or historic monuments to people who want to use drones for malicious purposes. The ' gun ' is effective within 400 meters.