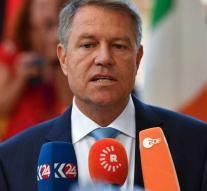 bucharest - Romanian President Klaus Iohannis removed the head of the Anti-Corruption Department (DNA). Iohannis had previously refused to dismiss DNA chief Laura Kövesi, but was refused by the constitutional court.

The DNA continued under the leadership of Kövesi many prominent Romanians, including politicians and administrators of government institutions. The Social Democratic government demanded her resignation, partly because Kövesi would have gone beyond her book and would damage the image of the country. That led to a clash between the cabinet and President Iohannis.

The government finally successfully moved to the highest court to enforce the departure of Kövesi. Iohannis made it known Monday to heed the verdict. 'The president has issued a decree with which the chief prosecutor has been removed from her post,' said the president's spokesperson.