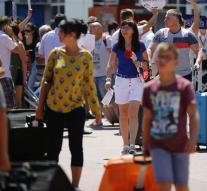 antalya - For the first time Saturday a Russian charter tourists flew to Turkey in eight months. The device turned off 189 holidaymakers in the resort of Antalya. Hence the 'cold war' between the two countries seems to really end.

Turkish President Recep Tayyip Erdogan offered his colleague Vladimir Putin late last month in writing apologies for the shooting down of a Russian fighter in the border with Syria. Thus he laid the basis for normalizing relations.

In response to the downing of the jet in November Putin banned travel companies offering flights to Turkey. Thus he spent the Turkish tourism industry, an important source of income, a heavy blow. In May, 90 percent fewer Russians greeted at the resorts than a year earlier. The sector also has suffered from terrorist attacks