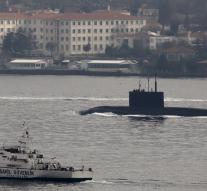 moscow - A Russian Navy ship and a boat of the Coast Guard are on the Black Sea a Turkish merchant ship forced to change course. The Turkish ship would have lain in the path of tugs of a power company in the Crimea, which versleepten drilling rigs.

This was reported by the company, Chernomorneftegaz Monday. According to the energy company, the tugs were able to deliver the equipment safely.

The message comes a day after a ship of the Russian Navy had fired warning shots near a Turkish ship in the Aegean Sea. The Russians were in their own words compelled to do so, because otherwise the ships together would have collided.