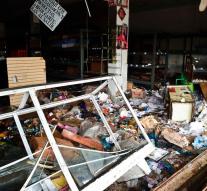 caracas - A Venezuelan protester died on Friday (local time) after shooting a day earlier in his head. That happened during the fighting between security forces and demonstrators in the city of Valencia, the authorities reported.

According to the mayor, four other people were injured in the riots in the city. Also in other places in Venezuela it is uneasy. Thus, young people in the state of Zulia bore loudly a statue of deceased president Hugo Chávez.

Images of the incident appeared Friday evening on social media. It can be seen how the image of a selling Chávez is lifted several times and thrown to the ground. The socialist leader died of cancer in 2013, but his successor is still in power.

A parliamentarian of the opposition said that students destroyed the statue of Chávez. 'They are rightly accusing him of ruining their future,' said Carlos Valero.