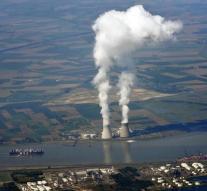 purpose - Once again, a nuclear reactor in the Belgian Doel has fallen out. Reactor Four was dismissed manually on Friday morning because unscheduled maintenance had to be committed, reports outsider Engie Electrabel.

On Tuesday evening, reactor three was automatically triggered by a steam valve problem in the non-nuclear part of the reactor. That reactor is running again. Number four will be connected to the network again on Saturday, expecting the energy company.

The nuclear power plant at Antwerp is just across the Dutch border. The life span of both Belgian power stations, including those in Tihange, under Maastricht, has been extended until 2025. In neighboring countries there is a great deal of concern about safety.