Home / World / Another mayor shot dead in the Philippines 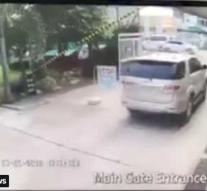 manila - In the Philippines two mayors were liquidated in two days. Mayor Ferdinand Bote died Tuesday after being attacked from a motorcycle, police say. A day earlier his colleague Antonio Halili died after being shot at a ceremony.

The attack on Bote (57) took place when he and his driver drove away at a government office in the provincial capital of Nueva Ecija. The perpetrators hit a motorcycle and opened fire on the mayor's car. The police subsequently found eighteen bullet shells. The Bote driver remained unharmed.

The 72-year-old Halili died a day earlier. He was hit by a bullet while he was singing the national anthem at a ceremony in Tanauan. The mayor had gained fame by forcing alleged drug dealers into a so-called 'walk of shame' by the municipality. He was also associated with drug crime himself, but denied the accusations.