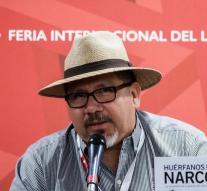 mexico - A well-known journalist was shot on Monday in northwest Mexico. Javier Valdez, 50, died after unknown attackers opened the fire on his car in the state of Sinaloa, reported the RioDoce website.

It is the fifth time in three months that a Mexican journalist is killed. Valdez received an International Press Freedom Prize in 2011 for his reports on drug trafficking and organized crime.

The journalist realized that his work was life-threatening. 'At the place where I work, Culiacán in the state of Sinaloa, it is dangerous to live,' he said after winning the prize in his speech, according to the Journal of the Protection of Journalists (CJP).

He described the circumstances under which he pursued journalism as 'walking on an invisible line drawn by the villains, smuggling drugs and sitting in government, in a field sprung with explosives'.