Home / World / 'Another four terrorists terrorist cell on the street' 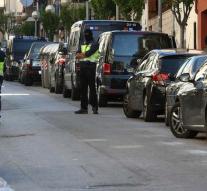 barcelona - The perpetrators of the two attacks in Barcelona and Cambrils, according to the Spanish newspaper El Pais, belong to the same terrorist cell. It contains twelve members.

The newspaper says that on the basis of statements by terrorism experts. So far, the police arrested three men. Five members of the group were shot dead in Cambrils on Friday on Friday.

Whether the police are looking for all members of the cell is not known.