Home / World / Another chaos due to British Airways problems 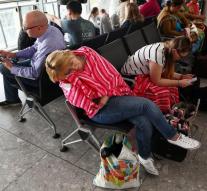 london - Flights to and from London Heathrow Airport last Sunday came on Sunday for the second day in a row with problems caused by a computer failure at British Airways airline on Saturday. The aftermath of that echec caused a lot of delays and cancellations a day later.

In total, British Airways deleted 95 flights on Sunday, around 10 percent of the total. In addition, almost a quarter of the flights were delayed.

Due to the failure on Saturday, British Airways was forced to cancel all flights from Heathrow and Gatwick that day. That meant concluding that 418 flights were deleted while another 568 flights were struggling with delays.

The intention was to fly to London's Gatwick Airport, according to 'almost normal schedule' on Sunday. Also, many flights to and from Heathrow would be operational again.

A problem with the electricity supply put the British Airways computer system flat on Saturday. The failure of ICT facilities caused major discomfort to many travelers. Thousands of passengers stranded. Monday is a holiday in Britain and many Britons wanted a long weekend away.